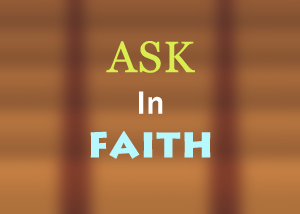 In v. 2-4 James taught us how trials produce endurance and how continued endurance leads to maturity. It is a heavenly logic which requires heavenly ‘wisdom’ in order to implement it in one’s life. And probably that is why James continues by saying that if we lack that wisdom then we should ask God. But having started with the subject of wisdom, this passage goes beyond it and talks more about God’s willingness to give and the need to ‘ask in faith’. Here are three important points that we learn from this passage:

God gives single-mindedly and without finding fault (v. 5): James makes two important claims about God in this verse. That he ‘gives generously’ and ‘without reproach’. The word ‘generous’ hints at God’s attitude towards giving. That he is absolutely ‘sincere’ about the task of giving. He never has second thoughts about giving i.e. ‘should I give or not give’. He is ‘single-minded’ about giving (notice the underlying word play when you compare it with Jas. 1:8, ‘double-minded’). No wonder another translation says ‘he is always ready to give’ (Living Bible). James’ second claim is that he gives ‘without reproach’ i.e. ‘without finding fault’. He does not ‘revile or mock or insult’ the one who is asking. Based on the testimony of other scriptures, this certainly does not mean that the one who is asking is ‘faultless’ but that God gives despite our faults (Ps. 130:3; 143:2; Prov. 20:9).

To those who ask in faith (v. 6a): But how is that in sync with God’s perfect nature? Will he always keep giving to sinners? No! And that is why James reveals a condition, according to which, the one who asks must ‘ask in faith’. Here James goes beyond the Jewish faith to ‘faith in Jesus Christ’ because that is the common faith shared by him and his readers (Jas. 2:1). James’ confidence about God’s ‘single-mindedness’ or ‘sincerity’ in giving is based on the fact that God did not hold back his beloved Son in order to save us from the consequences of sin (Rom. 6:23). This is in sync with how Paul argues in Rom. 8:32 that if God gave us His Son, ‘will he not also with him graciously give us all things?’. And James’ confidence that God gives ‘without reproach’ is also based on the fact that He gave us His Son, ‘while we were still sinners’ (Rom. 5:8). And that is how God continues to give to His people because now all our sins have been taken away by Jesus and we are now ‘righteous’ before God (2 Cor. 5:21).

But not to the doubter (v. 6b-8): Our asking is further qualified by James, that we should ask ‘with no doubting’. Just as he is talking about ‘faith’ in Jesus Christ, the doubting also is with regard to Jesus Christ, who is mentioned as ‘the Lord’ in Jas. 1:7 (cf. Jas. 1:1). There are people who claim to believe in Jesus but their loyalty towards him is not consistent. It changes with every new circumstance ‘like a wave of the sea’ (v. 6b), they are ‘unstable’ in all their ways (v. 8b). In other words, the doubter is split in his heart between Jesus and other things (like ‘money’ Matt. 6:24 or ‘self-righteousness’ Lk. 18:9-14). He is experiencing a ‘spiritual schizophrenia’ and therefore called ‘double-minded’ (v. 8a). Such people, according to James, will have a fruitless prayer life (v. 7).

Application: Hold fast to the unchanging truth that God gives single-mindedly without finding fault. That should give us the confidence to pray much more than what we are doing right now. And this confidence is not based on anything else but what Jesus has done for us on the Cross. In Jesus all God’s promises are ‘Yes’ and it is through Him that we utter our ‘Amen’ (2 Cor. 1:20).